Gibbons Drama is an ensemble-based, performance-driven theater program grounded in the idea that theater is best experienced through doing. In the classroom or in performance, Gibbons Drama aims to provide all members of the Gibbons community an opportunity to come together for a personal and artistically satisfying theatrical experience. Gibbons Drama plays a vital role in the cultural life of the school, producing five fully mounted plays and musicals each school year.

The Laramie Project is an actor-centered text in which a tight ensemble of versatile actors rapidly assume multiple roles over the course of the play.   We are seeking to cast a diverse ensemble of 10-12 actors.

Callbacks Part I: Readings for the roles\pages listed after your name.

Callbacks Part II: Actors will read a scene or text of their own choosing based on personal preference or desire.  Please inform AJ Helms of the scene\text you would like to read during the the first half of callbacks.  You are free to choose any scene partners your moment may require.

Callbacks will be held in the Studio Theater.

In October 1998, a 21 year-old  University of Wyoming student was kidnapped, severely beaten, and left tied to a fence in the middle of the prairie outside Laramie, Wyoming. He died several days later in an area hospital. His name was Matthew Shepard, and he was the victim of this assault because he was gay. Members of the Tectonic Theater Project made six trips to Laramie over the course of a year and a half, in the aftermath of the beating and during the trial of the two young men accused of killing Shepard. They conducted more than 200 interviews with the people of the town. The Laramie Project is a breathtaking collage that explores the depths to which humanity can sink and the heights of compassion of which we are capable.

IMPORTANT: The expectation for actors cast in The Laramie Project ensemble requires attendance at ALL rehearsals, regardless of your GREEN\GOLD group designation.

Rehearsals for The Laramie Project will begin on Monday, January 25 and will be held weekdays after school from 3:30-6:00 pm. We will not rehearse on Wednesdays, with the exception of  February 10 and March 10.

When Charlie Cox, a middle-aged editor, learns that he has the incurable, degenerative condition known as Lou Gehrig's disease, he gets in his car and starts driving. He soon finds himself in the Arizona desert, where he uncharacteristically picks up a hitchhiker, a sarcastic, impatient guy named Wally, who happens to be his own personal death emissary. As Wally urges him to get it over with, the lovely, blind Kiki enters the picture wearing dark glasses. Wally is infuriated when love blossoms between Charlie and the widow Nell, and the ensuing battle between Death and Love teaches Charlie the importance of living life to the fullest.

Audition for Charlie Cox Runs with Scissors are open to all Gibbons students. Please fill out the  Gibbons Drama Audition Form and sign up for a 5-minute audition appointment.

Cast size: 3m., 2w. (This production will be double cast with Green\Gold groups).

Auditions will be held in the Mainstage Theater.

Rehearsals for Charlie Cox Runs With Scissors will begin Monday, February 8 and will generally be held on your Green\Gold group days after school from 3:30-6:00 pm.

During production week, students will be required to attend ALL rehearsals. 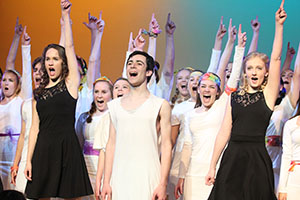 Auditions for Gibbons Drama co-curricular productions are open to all CGHS students. Audition information for each show is posted on the Gibbons Drama website 2-3 weeks in advance of auditions.

Rehearsals for our productions typically occur after school Monday-Friday from 3:30 -6:00 P.M. and on Saturday afternoons from 1:00-5:00 P.M. Gibbons Drama provides students the opportunity to explore, experience and engage with all aspects of stagecraft, performance and production, with classes including performance skills, technical theater, directing, musical theater and design.

Drama students engage their imagination and creativity in a collaborative, project-based classroom environment that is as immersive as it is supportive.  Along the way, drama students practice and develop valuable life skills in the areas of critical thinking, creative problem-solving, collaboration, self-discipline, confidence, leadership, and perseverance.

Detailed information about all Drama Program academic course offerings can be found via the Fine Arts Course Descriptions. We are an ensemble-driven community of creative leaders
who embrace and share our gifts to glorify God through the art of theater. 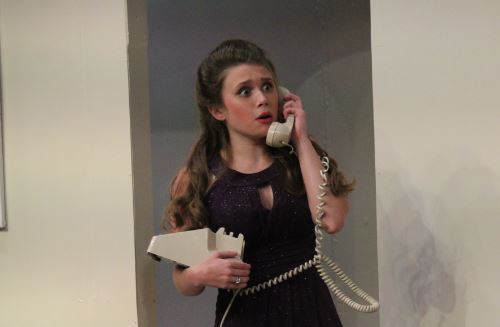