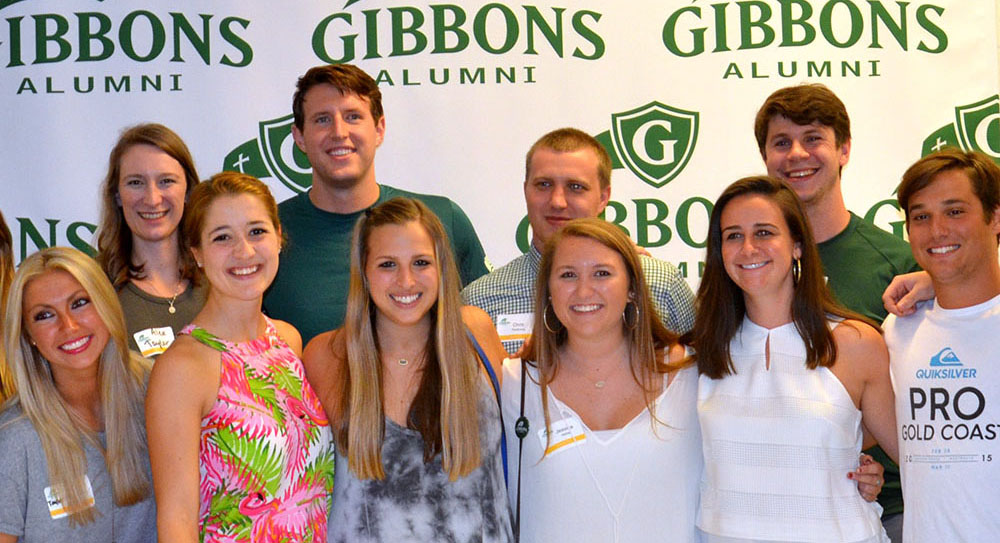 They came to share memories with classmates, reminisce about football, celebrate their alma mater, and rejoice in returning home. They came to enjoy Homecoming Reunion Weekend, Cardinal Gibbons' version of a large family get-together.

Gibbons was excited to welcome home 200+ alumni and guests this past weekend for Homecoming Reunion festivities, Susan Leigh '87, associate director of alumni advancement, said, adding that many classes also held milestone reunions. Leigh noted that the weekend (September 22-24) was made even more memorable with the added celebration of the 25th anniversary of the return of football to Gibbons, which drew players from those early years.

Director of Athletic Leadership and Legacy Dean Monroe agreed and added: Seeing so many of the players and coaches, especially those who were integral to restarting the football program, is a testament to the impact the school and its athletics program has had and continues to have on its students. Additionally, he noted, "I thoroughly enjoyed reconnecting with so many of my former players and cherished the time spent sharing so many special memories."

To be sure, stories and memories were shared in abundance throughout the two-hour, pre-game homecoming gathering. Conversations, for instance, circled around the former Western Blvd. campus, particularly from the '67 grads celebrating their 50th anniversary; or around that inaugural football season 25 years ago, from the 90s players. There were also discussions about favorite coaches and teachers, with chemistry educator Sister Janet Schemmel, SND, coming up often.  Alums also talked about their fondest memories, like gathering with friends and ordering pizza from the pay phone in the courtyard at the Western Blvd campus.

In between reminiscing about their high school years, graduates attended numerous events. Along with the pre-game gathering, complete with a Crusader KidZone, there was the Gibbons vs Leesville varsity football game. During half-time alums watched as Homecoming King, Connor Reilly '18, and Homecoming Queen, Emma Briskman '18, were crowned. They also helped paid tribute to fellow Crusader Dennis Williams, who was elected class president for the '71-'72 school year.

The days leading up to Homecoming Reunion Weekend, known as Spirit Week, were also filled with activities, and concluded with the fall pep rally on Friday afternoon.

Alumni events, however, continued throughout the weekend with a breakfast and tour of the school on Saturday morning, followed by reunion celebrations Saturday evening at several area locations. The weekend concluded on Sunday with morning Mass at Holy Name of Jesus Cathedral, located on the site of the school's former Western Blvd. campus. Following the Mass, alums were invited back to the Edwards Mill Road campus for a presentation by Principal Jason Curtis about the history of the school and its connection to the new cathedral.